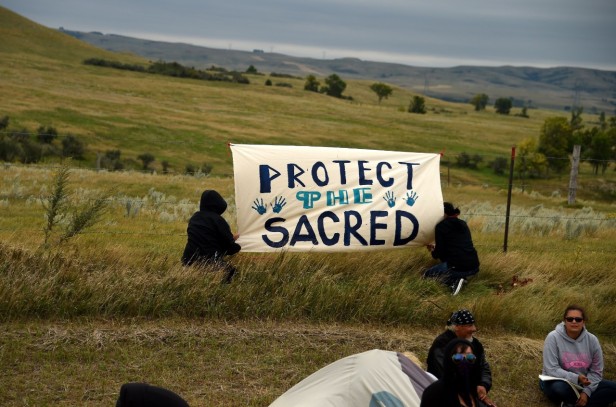 The White Man’s misdeeds in America towards its indigenous peoples are incalculable in number and cruelty. I was reminded of this last week when Karen and I visited the Grand Canyon and learned from the Visitor Center that Yavapai and Apaches once lived adjacent to the Canyon. That is, until 1874, when the government closed the Camp Verde Reservation and forced its residents to trek 180 miles to the San Carlos Apache Reservation. More than 100 Native Americans perished.

Nearly two years ago we witnessed the subjugation of the Dakota Access Pipeline protests in North Dakota that had commenced in 2016. Primarily affecting Sioux residents of America’s fifth largest Indian reservation, encompassing 2 million acres, the pipeline traverses sites sacred to the tribe and perhaps compromises the Reservation’s water purity.

Initially, it appeared the tribe had won when President Obama shelved the plan in late 2016, pending an environmental review, which would take years to complete.

Alas, there came the surprise of Trump’s election win and the inauguration of an administration strident in anti-environmental bias. In January 2017, came Trump’s executive order approving both the Keystone (Alaska) and Dakota pipelines.

The result, several hundred thousand barrels of oil now flow beneath the once pristine landscape.

This wasn’t a first happening for the tribe. In the 1960s, the Army Corps of Engineers built the Oahe Dam near Pierre, SD, flooding 56,000 acres of the Reservation’s farms and woodlands. Elderly residents recall their homes being burned prior to the flooding.

Ironically, the Standing Rock Reservation is the birthplace and final residence of Sitting Bull, who fiercely resisted white infringement on Indian land. It was his refusal to submit to the government’s order to remove the Sioux to a reservation that led to the famous Battle of the Little Big Horn, in which the Sioux defeated federal troops led by Custer’s 7th Cavalry in 1876.

In 1890, he was shot to death at Standing Rock Reservation by Indian agents attempting his arrest. Several weeks later, the army massacred 150 Sioux, perhaps more, at Wounded Knee Creek. Some historians suggest it was an act of vengeance, carried out by the 7th cavalry.

A wise, observant chief, it was Sitting Bull who asserted, “Hear me people: we now have to deal with another race—small and feeble when our fathers first met them, but now great and overbearing. Strangely enough they have a mind to till the soil and the love of possession is a disease with them. These people have made many rules that the rich may break but the poor may not. They take their tithes from the poor and weak to support the rich and those who rule.”

Prescient and explicit, Sitting Bull’s comment lends context to the historical narrative of White infringement on the rights of its native peoples that continues even now.