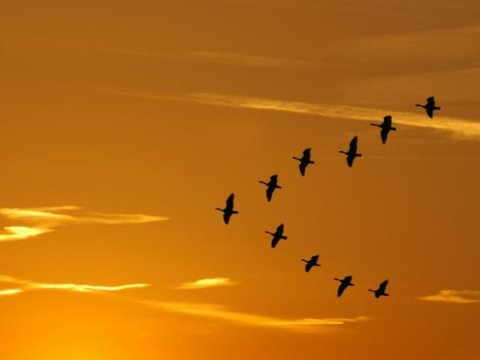 We take for granted that birds in the millions returning from their winter feeding grounds in Central and South America will make it back to nest and mate in our yards each spring.

The rude reality, however, paints a scenario of thinning numbers as their habitat continues to give way to human incursion; wetlands get drained; toxic sprays are employed; and GMO agriculture reduces the insects on which many birds feed. Lamentably, up to 4 billion birds are killed by outdoor cats annually. (No typo here.)

And then there’s climate change.

If this scenario continues, we may well see a world devoid of birds and with their disappearance, our own.

Birds do a lot for us:

Birds do all of this and more, along with providing many of us city folk with a rare contact with nature.

Sadly, fewer of them are completing their already perilous journey, often of several thousand miles, transversing oceans and mountains, to keep company with us every spring.

In one of nature’s greatest marvels, birds don’t require a compass to make their way to where they were born or to their winter habitat.

Guided by the stars, they know North from South. Alert to the sun’s position in daylight, they can discern East from West.

They also intuit the distance they must fly.

Regrettably, their indwelling “magnetic compass” doesn’t always serve them well in a modern world with its tapestry of burgeoning cities filled with light that produces a celestial jamming resulting in their disorientation, exhaustion and death as they unwittingly fly into multi-story buildings, leaving a deadly debris come morning.

With urban sprawl come media towers, like buildings, illuminated nightly to pre-empt airplane collisions. Each year, some 6.8 million birds perish in collision with cell and radio towers and their guy lines.

In a recent summation of studies, researchers found that 63% of bird casualties in the U. S. and Canada are small birds of 156 species, some on the endangered list.

If this isn’t enough, our bird friends face other ominous threats to their survival from our newer technologies such as wind turbines and solar panels integral to our need for renewable, clean energy resources.

This led to the Obama administration, normally on cue with environmental priorities, initiating a federal “permission slip” allowing for wind farms to kill up to 30 bald and golden eagles annually under 30-year permits, despite it’s being against existing law protecting these species, one of which is our national icon.

As I write, I’m happy to learn that our government’s connivance didn’t sit well in a California court, which demanded an impact study. Two weeks ago, the Fish and Wildlife Service dropped its appeal to reinstate the policy.

How bad can wind farms be for birds? A recent California study estimated that up to 573,000 birds and 888,000 bats are killed annually in thar state alone!

Wind turbines now account for 5% of our energy and continue to proliferate, with more than 15,000 presently in service. The death toll must be staggering!

But solar farms also pose another lethal threat to birds, singing, crippling and killing them. Unfortunately, birds often mistake reflective panels for water bodies. Some of these solar farms can be gargantuan in their expanse, with one solar farm in Riverside County, California occupying 4400 acres.

We’re unsure just how many birds solar farms kill, but we believe it to be a considerable number. In a recent investigation, the National Fish and Wildlife Forensics Laboratory recovered 233 birds from three California desert facilities. Many birds literally catch fire on contact with solar panels.

The problem is complex with the need to find new energy sources that don’t pollute and are renewable and yet protect our birds. But we can do more to assure their well-being by demanding impact studies before wind turbines and solar panels come on line.

We can also advocate they not be located in migratory pathways.

We can power down our city lights. A lighted New York City skyline may be spectacular viewing late at night, but it’s a death threat to birds. Cities like Toronto, one of North America’s most progressive cities, supported by the public, has been doing so for years.

We can support preservation of bird habitat such as wetlands and creation of new ones.

I like how Peter Dunne, the director of the Cape May Bird Observatory, has put it: “Without birds, nature would lose its most engaging envoys,” to which I would add that their demise would seal not only their fate, but ours.