Down, down, down into the darkness of the grave
Gently they go, the beautiful, the tender, the kind;
Quietly they go, the intelligent, the witty, the brave.
I know. But I do not approve. And I am not resigned. –Edna St. Vincent Millay 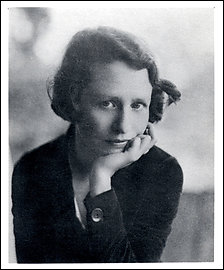 While the book’s scope is large, relying chiefly on letters, diaries, journals and interviews, important details are sometimes omitted and the organization of her massive material could be better integrated.

Unfortunately, Milford proceeds chronologically, transitioning in step-stone fashion from one source to another, interspersed with brief commentary. Instead of critical acumen, she offers readers laudatory generalizations, rendered in ejaculatory phrases.

Millay enjoyed a stunning popularity for a poet and playwright in the 1920s and 30s, her poetry collections selling in the thousands and providing a comfortable income. She was awarded a Pulitzer for her poetry in 1923.

She also barnstormed America several times. Appearing before sold-out audiences, she mesmerized them with her spectacular delivery, though outwardly it came unexpected, since there was always this latent fragility about her.  At just 5”1” and scarcely weighing a 100 pounds, she gave off the aura of a child, doll-like in silk gown.

Audiences were most certainly lured by her unconventional lifestyle. Rumored to be sexually promiscuous, Millay was bisexual and in an open marriage. She was also outspoken, a social activist, chain smoker and heavy drinker.  Not since Byron, with whom Millay was often compared, had a poet so widely captured the public’s imagination and curiosity. The poet of the Jazz Age had, in our contemporary idiom, taken on the likeness of a rock star.

Milford rightly dubs her the exemplum of the New Woman, which helps explain Milford’s motivation to undertake Millay’s biography, a poet who sadly lived to see her poetry eclipsed by the rise of the Modernist Poets (e.g., Pound, Eliot, Stevens, Williams and Auden).

Novelist and poet Thomas Hardy famously commented that there were only two great things in the United States, its skyscrapers and the poetry of Millay.

Millay had good luck on her side in her early years. Coming from an impoverished, dysfunctional family in Maine, she had submitted a poem called “Renascence” in a contest sponsored by Lyric Year. The poem would launch a career.

Wealthy arts patron Caroline B. Dow, who heard Millay recite the poem and play the piano, offered to financed her at Vassar College, which provided the milieu that ultimately fashioned Millay into a highly cultured woman.

Millay was forthright when asked why she thought her poetry was so popular:

I think people like my poetry because it’s mostly about things that anybody has experienced. Most of it is fairly simple for a person to understand. If you write about people who are in love, and about death, and nature, and the sea, thousands…understand…my poetry because it’s about emotions, about experience common to everybody.  Then, too, my images are homely, right out of the earth.

Today, Millay has largely been relegated to a footnote in literary history. I still have my copy of Norton’s Anthology of Modern Poetry. After a brief introduction, it features only two Millay poems, among them, her most famous quatrain that foreshadows the transience theme pervading her poetry:

My candle burns at both ends,
It will not last the night;
But ah, my foes, and oh, my friends—
It gives a lovely light.

Years ago, can’t remember where or when, I had read a critical review that dismissed Millay’s significance. Sadly, it had prejudiced me until I took an online course from Stanford in 2015, called Ten Pre-Modern Poems by Women, which included Millay.

Forced to wrestle with “Recuerdo”, outwardly a seemingly simple poem, I discovered a subtlety between the lines, alerting me that maybe this was a poet I needed to know better, and Milford has convinced me even more.

As for the Norton Anthology’s superficial inclusion of Millay, you can argue it’s merely anachronistic, not substantive, a bastion of male hegemony needing to be challenged and on good grounds.

But then Millay didn’t allow herself to be the tool of any polemic, including feminism:

All of which makes me think of Derek Walcott, who died just hours ago.  He didn’t want to be thought of as a black poet, but as a Caribbean poet.

What would she say to a course like Stanford’s that excluded male poets, making for a segregated artistry?

Or to academic conferences for women writers only?

It’s the sort of thing the male dominated academy used to do in their condescension:

We are supposed to have won all the battles for our rights to be individuals, but in the arts women are still put in a class by themselves, and I resent it, as I have always rebelled against discriminations or limitations of a woman’s experience on account of her sex.

Millay’s candor, her directness, the ease with which her words flow in her letters and journals I greatly admire. She filled a room with her presence, made you feel important with her focus, proved prodigious in her love and compassion for family and the unfortunate.

As a former Vassar classmate expressed it, “She was a girl who wanted to be beautiful and well-liked and powerful in her class. And she set out to be just that.”

The sad truth of transcience, or impermanence, her poignant theme, remains:

To what purpose, April, do you return again?
Beauty is not enough. (“Spring”)

In all things, aesthetic conventions ultimately dissolve before new facets of engendering. Millay’s poetry straddles two worlds, that of the Victorian with its Romanticism, diction and metrics; and the modern with its strident subversion of conventional sensibilities and aesthetic maxims.

In reflecting upon her work, I think of  Second April (1921) as among her best work with its free verse and passionate sonnets. I would point readers to her “Spring” and “Ode to Silence” poems in particular.

For specifically feminist poetry, I’d recommend sonnets 8 and 18 in The Harp Weaver and Other Poems (1922). Reviewing The Harp Weaver, influential and accomplished poet Harriet Moore wrote, “How neatly she upsets the carefully built walls of convention which men have set up around their Ideal Women. {She is} perhaps the greatest woman poet since Sappho.”

Milford’s biography abruptly ends with Millay’s seemingly accidental death on October 28, 1958, at Steepletop, her beloved rural farm in Austerlitz, NY, nestled in the Berkshire foothills. In actuality, she had suffered a heart attack, precipitating her falling down a flight of stairs, breaking her neck.  She was 58. She is buried there and a guided trail, open year round, takes you to her grave.

Milford owes an immense debt to Millay’s sister, Norma Millay Ellis, who inherited Steepletop and turned over her large collection of salient materials for Milford’s pursuit, making her biography possible. Norma had selected her to do the biography based on her success with Zelda, a best selling biography of F. Scott Fitzgerald’s wife.

Milford doesn’t mention it, but the well-regarded poet Mary Oliver had visited Steepletop and developed a close relationship with Norma, living with her at Steepletop for seven years, and was instrumental in organizing the Millay manuscripts.

Milford subsequently edited and wrote an introduction for a collection of Millay’s poetry, The Selected Poetry of Edna St. Vincent Millay (2002).

Norma died in 1986, but Steepletop remains, lovingly preserved, both house and the gardens her sister delighted in, which you may tour through an appointment (May-October).

In the dining room, Millay’s china remains set out as though at any moment, our poet will make her appearance, silently, unexpectedly, as was often her way in life.