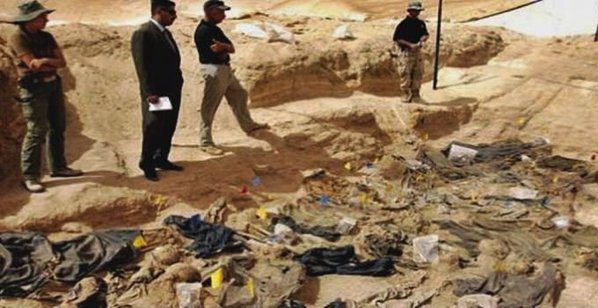 Evil is very real and as we know from the Paris mayhem, universal. ISIS, of course, is its mirror image.

This week, Kurdish Peshmerga troops, retaking the city of Sinjar in northern Iraq, discovered two mass graves just outside the city. One contained the bodies of 78 elderly women shot by ISIS; the other, some 60 men, women and children, presumably Yazidis, executed when ISIS captured the city a year ago.

These past several weeks have, in fact, marked a turn in ISIS strategy, since the free flow of recruits has nose-dived with the tightening of borders adjacent to Syria and Iraq and the entrance of Russia into the Syria conflict.

Accordingly, what’s transpired in France may only be the opening round as ISIS licks its wounds.

In the West, we are rightfully angry and troubled by the Parisian carnage. In Facebook, many of us have changed our profile images to include the French flag or Eiffel Tower to show our solidarity.

Contrast this with our visceral indifference with its ethnocentric moorings to ISIS’s barbarism on Muslims or those we perceive as political adversaries. In fact, Muslims have been its greatest victims.

A Russian commercial jet recently went down in the Sinai, taking 224 lives. Intelligence sources suggest a bomb had been placed aboard and ISIS, as with the Parisian violence, claimed they were behind it.

In Lebanon just one evening removed from the Paris massacre, a Hezbollah neighborhood was bombed, resulting in 43 deaths. Again, ISIS was the perpetrator.

In October, 99 lives were taken in twin bombings in Ankara, Turkey.  Although ISIS hasn’t claimed responsibility, they are believed responsible.

Meanwhile, media are saturated with coverage of the Paris horror, as they should be; yet by the same token, the coverage given to the aforementioned violent episodes have proven miniscule.

The Russians we don’t care much about these days, so our interest in the Sinai crash seems more out of curiosity as to its cause and not from compassion.

Last week’s bombings in Beirut: So what? These were Muslims, weren’t they? And I should add, Hezbollah. Israel knows their terrorism first hand, so they get what they deserve. Problem is, the casualties were civilian, many of them women and children.

Turkey? Isn’t that something we’ll be eating soon? Ankara? For many Americans, where the hell is that? For the record, it has a population of nearly 5 million! That’s twice the population of Paris!

Think about this: The greatest humanitarian crisis of our time is that of 4 million Syrian refugees, along with another 8 million dislocated Syrians within their country. Our response: bickering as to whether we should take in 30,000 or 65,000, or any at all as some of the GOP presidential candidates have suggested.

Meanwhile, the Washington Post informs us that American contributions to international causes has declined over the last two years.

I think of Shakespeare’s Shylock in The Merchant of Venice, who nails down the cruelty of indifference to the sufferings of those we see as different from ourselves, taking the liberty to replace Jew with Muslim:

Let’s call our indifference, or xenophobia, what it really is–a return to the tribalism we thought we Westerners had shed long ago.