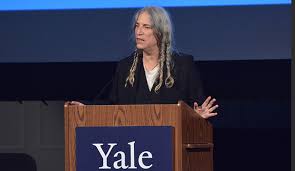 I hadn’t heard of Patti Smith before reading Devotion, her slim volume of 112 pages that expands upon her lecture presentation at Yale (2016), initiating the Windham-Campbell series, “Why I Write.”

Rock aficionados remember Smith for her punk-rock as singer with her own band and award-winning albums.  Politically, her “People Have the Power” became the theme song for Ralph Nader in his 2000 campaign for the presidency. In 2007, she was admitted into the Rock and Roll Hall of Fame. Rolling Stone ranks her among the top 100 rock artists of all time. And she still holds concerts.

She isn’t the norm among rock artists. A gifted painter, poet, and memoirist, she has achieved eminence both at home and abroad for her literary achievement, winning America’s most prestigious prize, The National Book Award for her memoir, Just Kids (2010), sharing company with the likes of previous winners like Faulkner, Bellow, Didion, Ellison, Auden and Roth. Earlier (2005), France awarded her one of its most prestigious cultural honors, “Commander of the Order of the Arts and Letters.”

I stumbled upon the book when I was alerted to good reads during our national lockdown and Devotion got mentioned. Years ago, I had read J. M. Cameron’s early biography of the French mystic, Weil, whose posthumous writings became influential. Not least, I’ve always been enamored with Albert Camus. Their presence in the memoir drew me in.

Devotion is divided into three sections, the first and last forming a frame for a fictional narrative of sixteen year old Eugenia, and her fateful liaison with much older Alexander and his exploitation.

In the first portion, we breathe Paris everywhere, its hotels, streets, restaurants, and artist luminaries. Voltaire, Nabokov, Genet, Joyce, Weil, Camus, Modiano—they hover over the City of Light, silent emissaries of the imagination, catalysts of its powers, instigators of imitation. It’s the France I love.

Smith is providing readers here with antecedents, or fragments, of what we experience, often unwittingly, if not hazardly, that surreptitiously have a way of becoming part of us, influencing who we are and what we become. Devotion doesn’t define the imaginative process. It demonstrates it, and thus the fictional tale at its center, an amalgram of subtle encounters in life’s passage, a mosaic the end result: As she tells us, “Most often the alchemy that produces a poem or a work of fiction is hidden within the work itself, if not embedded in the coiling ridges of the mind.”

Many readers dislike the narrative of Eugenia, a story of alienation from what gives solace and fulfillment, ending tragically, which is ultimately, as its center placement implies, the raison d’etre of Devotion, the essence of imagination’s weaving, or of what Smith fondly calls “alchemy” in the fusing of inchoate elements into an assemblage of unified nuance.

Eugenia, is an Estonian survivor, escaping the deportation of thousands of Estonians to Siberia by a paranoid Stalin during World War II, and owes her genesis to a Martti Helde documentary trailer called Risttuules, translated as In the Crosswind.

Similarly, Eugenia’s studied pursuit of ice skating had its source in Smith’s admiration for a sixteen year old Olympic Russian skater she saw on TV. She had no previous experience with the sport.

Weil is important as well in her separation at an early age from her mother through war and Jewish ancestry. Eugenia likewise experiences maternal loss and ultimately learns her paternal grandmother was Jewish. Like Weil, Eugenia is shy, sensitive and highly intelligent, incorporating Smith’s decision to fuse the physical and intellectual in her protagonist. Writers not only imbibe, they invent.

Eugenia yearns to know her family’s history, having been raised by her mother’s sister, Irna, to keep her safe from the Soviets. She tries to recoup the past “in a futile effort to uncover a father’s eyes, a mother’s face.“

Smith’s pastiche of myriad contributory sources underscores writing as an act of retrieving the past, of making time palpable, of discovering who we are, often unknowable, or as Irina comments in her letter near the story’s end, “There are no signs that tell us who we are. Not a star, not a cross, not a number on the wrist. We are ourselves.”

Artists must be free to hone their craft. Alexander nicknames Eugenia “Philadelphia,“ central in America’s quest for freedom. When he ties her hands late in the story, he symbolically shackles that freedom and pays its consequences:

“Yes, Philadelphia, a hotbed of freedom,“ she said, pulling the trigger.

(Smith grew up in Philadelphia.)

Hers has been an archetypal journey, crossing a continent, traversing an ocean, to sojourn on a new continent, now to return to an old. She subsequently enters Alexander’s apartment, reads his notes on presumably Camus’ The Myth of Sisyphus:

The text posed a philosophic examination of the question of suicide—Is life worth living? He (Alexander) had written in the margin that perhaps there existed a deeper question—Am I worthy of living? Five words that shook her entire being.

Thematically, Eugenia is an orphaned child, vulnerable in her need for affection, abandoned by her last relative at sixteen. She finds compensation in daily ice skating on a secret winter pond hidden in the woods and becomes very good at it. Stalked by outsider Alexander, she is lured away from her devotion to what sustains: “Her defining sense of self was completely entwined with the laces of her skates.”

Having lost her freedom and with it, her innocence, she has entered into knowledge, and seeks freedom’s retrieval. Guilt, however, intrudes with its heavy weight and she cannot pay its cost. Earlier she had asked her tempter of a better life, “What is the price of this privilege?” Social and cultural constructs have done their mischief: “… she vowed to never skate again. It was her penance, to deny herself the one thing she could not live without.”

Devotion manifests not only Imagination’s dynamism, but  its necessity for artists to complete themselves.  In sum, Smith has delivered an embedded parable of the consequences of its loss. As she tells us near Devotion’s end defining the writer’s mission, “What is the task? To compose a work that communicates on several levels, as in a parable, devoid of the stain of cleverness.”

In resuming the frame we again return to non-fiction in real time, a gathering of additional antecedents informing the embedded narrative—this time, not Paris, but the South of France.

There is her successful search for poet Paul Valéry’s grave, similar to her search for Weil’s when back in England, having garnered her material. She stops at an older tombstone with the word DEVOULEMENT carved diagonally across its border and asks her friend, what it means. “Devotion,” he replies, and a title is born, resonating the discipline that engenders successful artistry.

I’m curious about this. Despite the anecdote’s implied explanation of the title’s source, we should remember Rimbaud had written a poem, “Dévotion.” Rimbaud is Alexander’s favorite poet, as in real life, Smith’s.  It turns out, dévoulement isn’t the word the French employ for devotion as Rimbaud’s poem title indicates. It means “devolution,” i. e., regression to a lower level or abnegation, its synonym in French. Smith doesn’t speak French and reads its literature only in translation.

In a telephone interview, Smith says she first came upon Rimbaud in a bookstall in a Philadelphia bus station. Sixteen at the time, the same age when Eugenia meets Alexander, she saw Rimbaud’s photo on the cover of a 99 cent paperback edition of Rimbaud’s Illuminations, and found him “beautiful.” No money on her, she slipped it into her pocket. Dévotion is one of its poems (Tristram Fane Sanders, telegraph.co.uk, 9 November 2019).

It’s this third section I find Smith at her very best, so many sentences I’m underscoring, observant, moving, waxing poetic. She had received an invitation from Camus’ daughter, Catherine, to visit the family residence in Lourmarin near my favorite French city, Aix-en-Province.

She is given his bedroom, still housing his books, and access to his uncompleted manuscript, Le Premier Homme. She senses his presence, that affinity of one writer with another: “One could feel a sense of a focused mission and the racing heart propelling the last words of the final paragraph, the last he was to write.” True artistry, impelling its imitation, she senses the urgency, accompanied by confidence, to create her own.

There follows Smith’s compelling close, beautiful in its succinctness, unceasing in its resonance:

“Why do I write? My finger, as a stylus, traces the question in the blank air. A familiar riddle posed since youth, withdrawing from play, comrades and the valley of love, girded with words, a beat outside. Why do we write? A chorus erupts. Because we cannot simply live.”