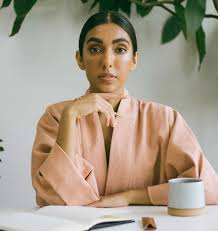 Just read New Republic’s glowing assessment of Canadian Instapoet Rupi Kaur, reflected in its swollen title, “Rupi Kaur is the Writer of the Decade.” (New Republic) Not even thirty, she’s published two poetry volumes, Milk and Honey (2015) and The Sun and Her Flowers (2017). Poet luminary of Instagram, she’s gathered 3.8 million followers. Milk and Honey, translated into 25 languages, has sold 1.4 million copies and made the NYT best seller list for 77 weeks. Her public readings are sold out. Exotic in appearance, along with a mesmerizing delivery, she just maybe has rescued poetry from slipping into oblivion in our STEM era.

But is it really poetry?

That said, I always suspicion poetry, or a great many other things for that matter, that suddenly takes off. Popularity isn’t a criterion of excellence, given the brevity of social clamor.

I suspect three elements behind her popularity:

Her “verse,” a term I prefer to use in gauging her work, is easy to understand, unlike so much of modern poetry that leaves readers stranded in a context void.

Social Media, that Internet darling, thrives on brevity. Say it quickly and get out. More than five lines, look out! Add a photo or two, you’re in. It’s Life magazine gone digital.

Give her credit. Her plaintive verse centers, like country music, in everyday happening—life’s tears, jerks and twists. It fingers loneliness, embraces assertion for the many lacking self-esteem, reaches past gender, creed and race. As a Punjabi Sikh immigrant, she speaks poignantly to the vulnerable and marginalized and that includes women. What’s more compelling than

You’ve got sentiment, but it doesn’t make for poetry. It’s simple, but that doesn’t mean it’s good.

Poetry centers in artifice—form, metaphor and even in a time of free verse, a latent rhythm. It probes deeply. Sensory, it shows, not tells, or like a good recipe, is the sum of all its ingredients that artists call “unity.”

It has a grammar.

To paraphrase Frost, Kaur’s miniscule verse is like playing tennis with the nets down.

She’s been accused of plagiarism by Nayyirah Waheed, another popular Instapoet, who pointed out similarities in Kaur’s verse, only to have Kaur ignore her messages.

Whatever the story here, there’s a plethora of poets who write like Kaur in what’s taken-on a fast food likeness for success. Take Warsan Shire, for example, another exemplar of the new idiom and quite possibly the better artist in her sophistication.

Kaur’s supporters are quick to invoke the identity politics fallback in countering critics. She’s a feminist of color who dares to speak out in an artisan world dominated by white men. She’s also hugely popular, makes a lot of money, and circuits the world. Artist rivalry kindled by jealousy is legendary.

But that’s not where the argument lies. We must judge Kaur by her work, not our politics. I find it cliche, platitude riddled, and banal:

i do not like the kind of love
that is draining
i want someone who energizes me.

Putting it out front, her verse resembles scribblings in book margins, succinct, but little more. The labored craft which Dylan Thomas rendered so movingly in “In My Craft Or Sullen Art” is sorely lacking,

Exercised in the still night
When only the moon rages
And the lovers lie abed
With all their griefs in their arms.

Kaur writes verse fitted to the Instagram. It fits well on your cell phone. But it’s prose, cleverly packaged for commercial success in line breaks to suggest profundity, often accompanied by line-drawings to augment the effect. (Sorry, she’s no e. e. cummings.)