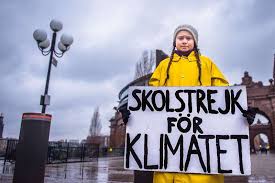 Today, May 24, was another walk-out-of-school day for thousands of children in 110 countries, urging their governments to take quick and meaningful action to avert environmental catastrophe. If only the politicians, and us, for that matter, would listen.

It’s certainly, if nothing else, gotten the climate crisis considerable media attention. Of course, it’s 16-year old Greta Thunberg of Sweden who started it all and is featured on the cover of TIME’s current issue as one of the most influential young people in the world. Just nine months ago, Greta stood alone outside the Swedish Parliament, carrying a sign proclaiming SKOLSTREIK FOR KLIMATET (School Strike for Climate).

Seemingly a brave, but naive and futile gesture of a teenager, it’s become a planted seed grown into a world-wide groundswell of young people taking climate change seriously. And why shouldn’t they, since their generation and their children will be affected most?

I like the way she articulates our crisis: “I believe that once we start behaving as if we were in an existential crisis, then we can avoid a climate and ecological breakdown. But the opportunity to do so will not last for long. We have to start today.”

Seems she’s even converted her own parents. Both have followed her into veganism as a way of contributing less CO2 and methane into the atmosphere. Greta’s mother, an opera singer, now travels by train rather than by air. Greta would probably love speaking in America, but since there’s no train track across the Atlantic, guess she’d have to resort to a freighter; that is, just so long as it wasn’t carrying oil barrels.

Imagine my surprise that not everyone admires this green movement Joan of Arc, one commentator dubbing her a “millenarian weirdo”:

I should point out that O’Neill writes for a smart aleck anti-climate change blog, so I can’t take him seriously, given the estimated 97% of scientists who embrace the reality of climate change and the humans factor for its origin.

Others use Greta’s Asperger’s Syndrome against her in myriad personal attacks, mocking her monotone delivery and fixed stare. I like Greta’s nimble response: “Being different is a gift.”

My heart pounds for you, Greta! I have friends who exalt in nature, yet never join that needed protest to universalize our climate crisis into action that saves both nature and ourselves.

You’ve been nominated for the Nobel Peace Prize. Is there anybody more deserving?