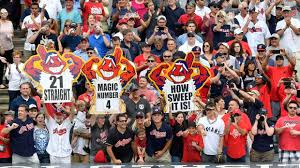 Last night, the Cleveland Indians won their twentieth straight game, tying the 2000 Oakland A’s, an American League record. Win one more, and they’ll have tied the 1935 Chicago Cubs. Still, they have a ways to go for the all time record, depending on how you count: the 2016 New York Giants won 26 straight games, although there was a tie that wasn’t counted against that streak.

You’d think Cleveland fans would turn out in droves to see their sizzling team, but not so. Last night, just 24,624 fans witnessed their historic blitz behind ace pitcher Corey Kluber at Progressive Field.

Seems they’d rather invest in their perennially dismal Cleveland Browns, who drew 67, 431 for their NFL opener against the Pittsburgh Steelers, which, not surprisingly, they lost. How bad is it? The Browns have lost 13 of their last 17 home openers.

Despite MLB’s aggressive, multifarious marketing efforts, let’s face it, baseball faces an evolving slide into a pastime of only marginal interest, or something like used to be true of lacrosse or soccer, the latter increasingly shoveling baseball aside as a draw for young people. As baseball aficionado C. J. Kelly observes in reminiscing his old neighborhood,

the baseball fields near my house lay empty on hot summer days except for the occasional Church softball games. The park that surrounds them is even devoid of kids most of the year. The fast-flowing river is all you can hear. The sound of a ball hitting a bat whether it be wood, aluminum and even Whiffle, that was so much a part of my childhood, is missing. You’re more likely to hear skateboards rumbling down the hill leading to the park. I can’t remember the last time I saw a kid walking anywhere with a baseball glove.

By the way, the average age of those tuning into a MLB TV game is now 55+.

I  remember being a kid in Philadelphia in 1950 when the Phillies won their first pennant since 1915. The excitement was palpable. Believe or not, the World Series had a tradition then of playing day games. In factories, workers turned on their radios, our teachers routinely filled us in on what was happening, city newspapers screamed the team’s fortunes in bold black front page headlines.

The 80s inaugurated the era of performance enhancing drugs. Maris, who had legitimately broken the Babe’s record of 60 homers in 154 games way back in 1961 would ultimately fade into stellar darkness as Bonds, McGuire, and Sosa eclipsed his accomplishment in the 90’s. Now we know how they did it. How many others did it too we’ll never know, since the MLB only inaugurated PED testing in 2003.

Ticket prices have soared. After all, players have to feed their families. Today, the average ball player makes $4 million a year. Draftees sign bonuses in the millions, never having played a single game in the Majors.

And for what? Take a relief pitcher, for example; maybe he pitches two or three times a week to just one or two batters each time, yet he can earn a huge payday, say like a million at the very least. The aces, of course, make much more. Arolis Chapman of the Yankees gets a cool $21 million a year. Pity Craig Kimbrel. He lags far behind at $13,250,000.

And then there’s the DH or designated hitter, kind of a built-in pinch hitter who can bat multiple times in a game and never take the field. Again, a lot of big bucks seldom proportionate to their actual contribution.

There’s no team or fan loyalty anymore. Today’s credo–meet my bottomline or I’ll take my glove elsewhere. Players often end their career having played for four or more teams;

The game’s lost much of its finesse like bunting. And when players do bunt, some pitchers get angry, taking it personally.

Ridiculously, you see a shift on nearly every player these days, even the low 200 hitters.

Strikeouts don’t matter either as batters swing for the fences rather than the base hit. This year, homers rival New Mexico hot air balloons in their celestial ascent, while batting averages remain earthbound.

At the heart of baseball’s decline is game length, usually at least three hours, often more. We’re living in the age of the clock and speed, but baseball hasn’t gotten the message. Pitchers taking thirty seconds each time to throw the ball can can drive you into dementia. And then there’s the frequent catcher-pitcher confabs.

Meanwhile, young people are turning away from the game in droves, and even Little League participation is declining.

What’s especially disheartening to me is the increasing scarcity of African-Americans playing the game, opting out for football or basketball. I think of Jackie Robinson who pioneered their inclusion in Major League Baseball and the long tradition of Black prowess contributing so much to making the game appealing and a gateway for disenfranchised Black youth.

The truth is, baseball is dangerously close to regressing to a white man’s game again, apart from the rich contribution of Caribbean ball players.

History used to matter in baseball, but they tore down Yankee Stadium anyway and built another, which they frequently can’t fill. Is Wrigley Field or Fenway next?

Back to when I was a Philly kid, I’d listen to radio broadcasts while on the floor playing with my toys. Soon I knew every player by name. If I had any pocket change, I’d be up at Shibe Park watching the hapless A’s. Summers, not a day, but I’d rush out the flat, joining the neighborhood kids playing stick ball against the factory walls.

I wish the old game were back. Today, it’s about money.

PS:  My wife just told me the Indians played this afternoon, winning their 21st straight game, a new American League record.  I don’t know about you, but I find that exciting.