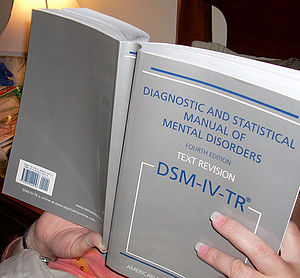 Well, that’s finally settled!  After months of vociferous debate the American Psychiatric Association has given its blessing to a revised edition of the Diagnostic and Statistical  Manual of Mental Disorders (DSM 5th edition), often called the Bible of psychiatric diagnosis.   A vital tool, it facilitates psychiatrists being on the same page.

Unfortunately, the DSM has often been fraught with opinion-based labeling, at times approaching the trendy and political, rather than drawing from established empirical data.  Casting a wide net, it can conceivably draw in most of us.  The inherent danger of psychiatry has always been its penchant for finding motive and making faulty inferences.  It loves labeling.

I’m reminded of a humorous rendition of this syndrome.  Two psychiatrists are talking to each other when a third party passes through the room and says, “Good morning!”  One of the psychiatrists then looks at the other and exclaims, “I wonder what he meant by that.”

Among some of the controversial changes in the revised DSM are the relegating of Asperger’s Syndrome to the expansive canopy of “autism spectrum disorder” (ASD). (No more Asperger Syndrome label.)

It also includes grief as a  clinical disorder, or variant of depression.   Many of us will find this a tough sell.

Better not be into loading-up on newspaper clippings, old photos (baseball cards?).  Hoarding, whatever that is, can get you into the psychiatric liturgy.

Labeling is dangerous for its dead-end, stigmatizing write-offs.  An educator, I’m aware of the short-circuiting of a student’s potential when an impatient, frustrated teacher simply writes him or her off as essentially unable to learn.

Psychiatry needs to get at causes, not symptoms, often social (e.g., poverty, prejudice, abuse, etc.), and rely less on medication to address supposedly faulty neurotransmitters.  Increasingly, research has shown that much of the reported success of SSRIs and the like is mere placebo effect.

Lowering the threshold for DSM inclusion becomes reminiscent of the Pharisees with their penchant for jot and tittle inclusion or the sometimes purist application of Sharia law.

Next time you worry about something be careful not to share it with anyone, at least with a psychologist or psychiatrist.  Though anxiety per se is a fact of daily life and hardly rates as mental illness, count on it to land you a high rung in the DSM.

One thought on “Anxiety is not a mental illness: reflections on psychiatry’s abuse”