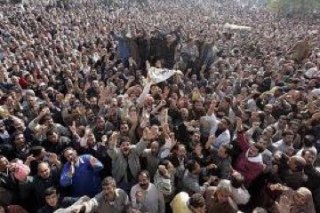 The news is quite predictable now, with its 24/7 coverage of unrest in the Middle East.  And the contagion is swelling _initially, Tunisia, then Egypt, now Yemen, Bahrain, and just recently, Libya.  Can Saudi Arabia, a critical source of the world’s oil, be far behind?
Most media report the unrest as an unprecedented quest for democratic government and the choices it provides to individuals.  I argue that this over simplifies, not the first time media has done this, of course.  The root causes rest in the economic and, more specifically, in sharply escalating costs for foodstuffs.  To cut to the chase, these are food riots.
According to the United Nation’s Food and Agricultural Organization (FAQ), food prices on the world market have risen 30% over those of a year ago.  In January, these increases reached their highest point in 20 years, plunging 44 million into the already swollen ranks of the impoverished.  According  to World Bank president Robert Zoellick, “It is poor people who are now facing incredible pressure to feed themselves and their families as more than half a family’s income goes just to buy foodstuffs.”
In Egypt,  56% of a person’s income is spent on food.  In Yemen, prices for wheat and wheat products have doubled over the past year.  Wheat dominates North African and Middle East imports of foodstuffs. Gulf countries import 100% of their foodstuffs, offset by oil revenues.
According to the FAQ, which traces monthly international prices of commodity products, including meat, dairy, cereals, oils, fats, and sugar, in just the last 3 months, sugar has risen 20%, oils 22%.  It’s worse with corn, now priced 73% higher than in June, 2010.
The contributing sources to these ills are multiple and largely of human mischief.


1.  natural calamities:  2010 saw wildfires in Russia due to record breaking temperatures and prolonged drought.  Floods devastated Pakistan and Australia.  In Sri Lanka, floods destroyed 30% of its wheat harvest.  Drenching rains despoiled South Africa of much of its anticipated harvest. (I have written of the connection of volatile weather with global warming in an earlier post.)


3.  diversion of cropland for production of biofuels to offset oil import costs.  In the  U.S., government grants oil companies a tax credit for each gallon of ethanol it produces, costing American taxpayers 6 billion dollars annually.  This has resulted in a 40% rise in corn prices on the world market.
To these factors, I would like to add another often missed: the exponential increase in human numbers and its corollary, increased demand.  In the U. S,, one of the world’s fastest growing industrial nations, population increased from 130 million in 1940, to 150 million in 1950, and now doubled to a current 308 million.
The UN anticipates a 9 billion world population in 2050, up from just under 7 billion presently. To feed everybody will require more land and water use and decimate forests still further.  Even if we were to succeed, many would remain malnourished and impoverished.  70 million, or two Californias, are added annually to the world’ s population.  While some take solace in declining fertility,  two thirds of Egypt’s population is under age 30.
And whatever happened to the Green Revolution with its high yield grain varieties, innovative pesticides and fertilizers?  The grim  reality is that its initial gains have been swamped by increases in human numbers.  Initially, a catalyst to its early promise was an increasing reliance on irrigation, with unforseen consequences for all in dropping water tables.  India, which became a food exporter, now imports rice, mostly from Australia,   Unfortunately, that windfall may be drying up quite literally.  Australia has cut its rice exports 90% because of prolonged droughts and more recent cyclones.
In China, the water tables are dropping 10 feet a year.  In the U. S, it’s worse, with water levels over past decades dropping 100 feet in Kansas, Oklahoma, and Texas.  By 2025, two thirds of the world’s people will live in locales lacking sufficient water.  Water, not oil, may well mitigate future conflict between nations.
Meanwhile, upheaval in North Africa and the Middle East signals warning of history’s tendency to repeat itself.  Tomorrow, the just returned exiled Muslim Brotherhood cleric Yusuf al-Qaradawi will address a mass rally in Cairo in Tahrir Square.   A brilliant articulator of purist Islam (100 books), he despises the West and loathes Israel.
Food prices?  More important than you thought: they can determine history, affecting us all.