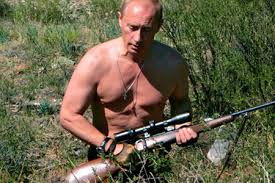 In a recent interview with Fox’s Chris Wallace, former Defense Secretary Robert Gates has said Crimea can be written off as a Ukrainian entity, with the possibility of still further Russian intervention in Ukraine until Putin gets a government to his liking.  I’ve always respected Gates, one of the best defense secretaries ever.

The problem with Putin is that escalating our threats just won’t work.  He has options too.  Just recently there’s been a rumbling that if the West plays rough, then Russia will no longer allow inspections of its nuclear arsenal.  In short, we’d be virtually back to the Cold War.  And if Europe does take meaningful measures–highly unlikely–it can easily limit natural gas supplies Europe depends on.

Tough talk may even provoke Putin to order troops into Kiev to depose its interim government, which he argues resulted from an illegal coup.  We take it for granted we’re dealing with a rational leader, not a Kim Jong Un, but don’t bet on it.  We do know that he served 16-years with The KGB, or secret police, much of it in East Germany with its Stasi repression.  In a post-Soviet era, his thinking is a throwback to Communist conspiracy.

Asked recently what he considered Russia’s greatest catastrophe, he replied, “the break-up of the Soviet Union,” which goes a long way to explaining his designs on Ukraine and desire to reconsolidate its former vast territorial domain under the guise of the Eurasian Customs Union, slated to go into effect next year.  (See my earlier post,  February 28, 2014:  Russia Likely to Intervene in Ukraine.)

Certainly, world criticism never bothered the Soviets when they invaded Hungary in 1956; nor the Putin regime when it invaded Georgia in 2008, occupying two breakaway provinces where they still remain.  It’s bare-chested, black belt Putin fully on display, true to the narcissistic personality disorder with its broad symptoms of enhanced self-regard, arrogance, absence of sympathy for others, and readiness to exploit.  We’ve seen it all before in the Hitler and Mussolini demagogues of modern history.

I don’t think for a moment our president impresses the Kremlin leader, certainly not after turning his back on a cruise missile strike.  So far the White House response has been one of rhetoric rather than any substance.  While I don’t agree with Republican hawks advocating revival of a missile defense system for eastern Europe, I do think this isn’t the time for reducing our troop numbers.  I’d settle for booting Russia out of the G8 rather than just canceling its upcoming June meeting.  As in most things, the bottom line is money.  We must make Putin’s Ukraine strategy costly.

Russia’s economy, by the way, for all the show time glitter of robust health in its $40 billion outlay for the winter olympics at Sochi, continues in disarray, with present growth forecast at just 1%.  Much of Russia’s financial resources depend on gas and oil exports, or as much as 80% by most financial analysts.

For Russia to cut supplies to Europe is a no-starter.  Russia’s future, in fact, looks ominous, with America on a fast track to energy independence and with potential capacity to supply Europe.  Ironically,  securing the Ukraine, a nation $35 billion in the red, is surely the albatross around the neck that should give Putin pause.

Russia ought to worry instead about shoring up its deplorable infrastructure.  When I traveled by bus several years ago from Moscow to Tula, a distance of about 120 miles, I wished I’d had a kidney belt, what with our wheels tumbling in yard wide holes all the way to the nearby Tolstoy homestead (Yasnaya Polyana).

Its oil and gas infrastructure is declining as well and will entail Russia laying out billions to modernize, compounded by worldwide demand for technical prowess at competitive prices.

Putin has seemingly forgotten his Russian comrades–all 144 million.  Just a few days ago, Russia underwent the biggest stock sell off in 5-years, with the ruble tumbing to a record low, requiring the central bank to raise interest rates.

As is, Russia is fast losing its talented young people with emigration increasing 22% in 2012, and with them, its future.  In the last ten years, nearly two million from the middle class have left Russia.   Ukraine, understandably, wants no part of a dismal future with the Russian Federation.

The pity of Russia with its vast resources is that, like many third world nations, its economy is dominated by a kleptomaniac oligarchy lining its pockets at the expense of a long suffering people.   No wonder the exodus.

Will the last one out please get the lights!