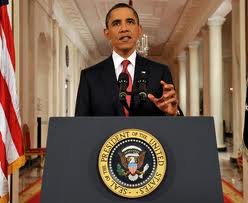 Last night, the President finally appealed to Americans to support deficit reduction, urging them to contact their representatives in Congress. Problem is that it’s not going to get the job done, as even Americans are divided as to the best approach.

Polls indicate that what Americans fear even more than the government defaulting on its loans are cuts in Medicare funding, and with good reason. It’s no secret Obama has been touting slicing some $600 billion dollars out of Medicare, largely by cutting back 30% on payments to doctors and hospitals. Finally, the AARP, usually in lock step with the Obama administration, is vociferously protesting and running spirited ads.

I just don’t see how it’s going to fly. Yesterday I had to visit my ophthalmologist. In the course of office banter, the deficit crisis came up, and I mentioned the proposal being kicked around in DC to cut back 30% on Medicare outlays. He shared that he didn’t know how he could absorb it. He might have to refuse Medicare clients. His current expenses were running so high it was possible that he couldn’t retire. This from a doctor!

Curiously, when I walked into the doctor’s office, virtually all of us were gray panthers, or getting there in a hurry. It’s reassuring that there are some 50 million of us and we do vote.

I’m not sure Americans remember that one of the President’s carrots for getting his Health Reform Bill passed was a promise to cut some $500 billion from Medicare by eliminating waste. Yeah some waste, but $500 billion’s worth? Hey, am I missing something here? Do the Dodgers still play in Brooklyn?

To play fair, I’m equally chagrined at the Republicans, intimidated by their purist Tea Party colleagues, resisting an increase in tax revenue. As I’ve pointed out in an earlier blog, it would solve our budget deficit problems in short order over a space of several years. You just can’t have your cake and eat it, too. We need a mix of cutting spending and raising revenue.

By the way, where are the cuts in benefit outlays for members of Congress? Oh, I forgot–they’re not under Medicare!