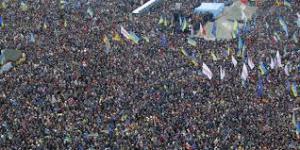 Last week, Ukrainian protestors in Kiev’s Maidan (its central square) were mowed down by security forces of the hated Yanukovych regime.  Undeterred, they advanced into the fusillade. What is life without freedom?

I’ve been thinking a lot about Ukraine, no doubt heightened by media coverage of the continuing unrest in that nation of 46 million.  But it’s more than the headlines.  When I was a young boy growing up in Massachusetts, I played with a friend who had recently arrived in the U.S. from Ukraine with his mother and siblings.  Though young, he had seen vestiges of World War II’s carnage.  While I can’t recall the details, they left me with an impression of a people that had endured considerable suffering.

In Lexington, Kentucky, there exists a vibrant, growing Ukrainian community.  We’ve had a lot of renovation done at our house and one of the primary workers is a Ukrainian affectionately dubbed “Slav” by his fellow workers.  We’ve talked about Ukraine on occasion.  On one occasion I accepted his invite to a bake sale at his Ukrainian church.  The church is doing well and is an anchor in providing a social network for newly arrived Ukrainians, which include many young people. The other day, I was walking back to my car after grocery shopping at Meijer’s, when a car honked. It was Slav. He had just returned from the Ukraine.

Just maybe Lexington’s best roofing enterprise happens to be Ukrainian. My physician is from the Ukraine.  How can I not think about them?

It’s estimated that some 7 million Ukrainians perished from famine following Stalin’s collectivization of Ukraine’s peasant owned farmlands in 1932-33.  Another 10-million perished in World War II.  What most historians miss is that Ukraine bore the biggest brunt of the Nazi invasion, being a total battleground between German and Soviet armies.  Only 5% of Russian territory was occupied.

Following the 1991 collapse of the Soviet Union, Ukraine announced its independence.  There was little Russia could do, since the world’s third largest nuclear arsenal was on Ukrainian soil.  In 2009, an agreement was worked out between the negotiating parties, which included the United States.  One of Ukraine’s demands was a guarantee of its sovereignty.  The U. S. granted Ukraine the same assurances guaranteed to non-nuclear signatories of the Non-Proliferation Treaty (NPT) and the signatories of the Final Helsinki Act (1975).

As I write, paramilitary forces in Russian dominated Crimea have seized the local parliament buildings and its airports and Putin has put 150,000 troops on alert.  The Crimea had been added to the Russian Empire under Catherine II.  In 1954, it was restored to Ukraine by Nikita Khrushchev, an ethnic Ukrainian.

Despite Secretary of State Kerry’s warning to Russia not to interfere, it’s not going to mean much in a way of any meaningful U.S. response, especially with an indecisive president in office who runs from confrontation; has failed to support moderate rebels in Syria, allowing extremist sectarian factions to enter into the fray; has never really signed on to supporting our troops in Iraq or Afghanistan; and is now bent on unilaterally reducing our army to pre-World War II levels.  No one wants war.  But it’s doubtful the EU or U.S. will invoke economic or trade measures either.

What seems a given is that Putin isn’t going to allow Ukraine to cozy-up with the West, culminating in joining the EU and becoming a NATO member.  Putin dreams of reestablishing a political and trade confederation of the former constituencies of the Soviet Union under the auspices of the Eurasian Customs Union (ECU).  Slated to go into full effect in 2015, its prototype presently includes Russia, Belarus, and Kazakstan, with Kyrgyzstan to join soon.  This grand scheme ultimately includes Ukraine, which can only be accomplished by Russian economic pressure and/or military intervention.  Putin’s scheme is to return Russia to its past preeminence, a world competitor on equal footing with the EU, USA, and China.  It’s what Sochi was all about.

Right now, the situation in Ukraine is ominous, given the large Russian majority population in Crimea and eastern Ukraine.  Historians may remember that Hitler used the pretext of a mistreated German minority to invade Poland.

It will only take a spark for history to repeat itself.

3 thoughts on “Russia Likely to Intervene in Ukraine”